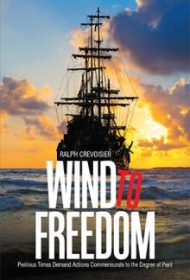 A historical saga told over several generations, Wind to Freedom details the journeys of an immigrant family across 60 years and four countries.

A cold spell in 1750s Switzerland prompts the three Courvoisier brothers to relocate their families from the Swiss Alps to the warmer climes of Normandy, France, to seek a better life. There, the family faces trials, such as acquiring land, starting businesses, and raising children. Yet they aren’t free to live in peace forever, as the Jacobian revolution in the 1790s splits up the family, forcing some of them to flee to the newly formed United States of America and a second chance at a new life. The narrative then focuses exclusively on the group emigrating to the U.S.

Although this novel tries to show the perils faced by immigrants (both in Europe and America) in the 18th and early 19th centuries, long stretches are devoted instead to painstaking details. For example, when a character becomes a Musketeer at Versailles, more detail is given to how he secured his accommodation than his duties as a Musketeer.

While such detail demonstrates the author’s thorough historical research, it leaves the story with little conflict or emotional resonance. Issues the protagonists face are solved quickly, eliminating any sense of drama. When one of the brothers is framed for his co-worker’s murder, for instance, it is resolved within a few pages and barely mentioned again. Even racial tensions in 19th century America are calmed through brief conversations.

What should be key emotional moments, such as the birth of a child or leaving a homeland forever, are relayed with straightforward, often-tedious prose that also contains some strangely academic sounding paragraphs, with narrative-stopping lines such as “the genus horse is a large quadruped.”

While the book provides a peek at some immigrant history, the flaws mentioned create a challenging read. Ultimately, the overly detailed prose and lack of emotional stakes give readers little reason to remain invested.