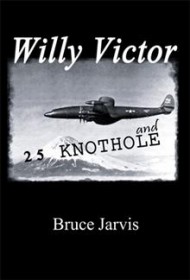 A little known, yet critically important U.S. airborne defense squadron operational from 1956-’67 during the Cold War is the focus of this engaging book, written by a former naval flight crewmember who participated in the air defense.

The Airborne Early Warning Squadron (AEWRON) missions were created after the U.S. recognized dangerous cracks in the ability of NORAD to detect enemy aircraft. AEWRON missions flew ’round the clock to watch for “bogeys” infiltrating from the Atlantic and Pacific Oceans.

Jarvis was a young radio operator on the specially designed planes, called Willy Victors, based out of Argentia, Newfoundland. After an explanatory preface, the author describes in novelette form his wide-eyed experiences with AEWRON, his buddies and women. The true story “with a little bit of fiction” highlights the mission’s purpose and importance along with lively anecdotes and activities of those flying the routes (called barriers).

The final 40 or so pages includes five appendices detailing the plane’s design, the barrier squadrons, a roster of the many crew and planes lost over those years and more. The book concludes with a bibliography and some details regarding the author’s life.

Jarvis has done a commendable job explaining his subject matter in a clear, concise and entertaining fashion. Details are descriptively sound, such as his thoughts on first viewing a Willy Victor: “The plane looked like a pregnant banana with a big bubble under its wing and what looked like a tower on its top. Wow!” Several black-and-white photos and maps are an added enhancement. There are minor editing flaws that don’t detract significantly from the narrative.

Despite its unusual construct, this is an absorbing book — one sure to appeal to a broad audience of readers interested in Cold War history, aircraft, defense and the sacrifices of unsung heroes.