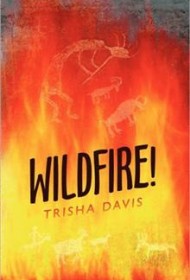 When 13-year-old Buddy goes to stay with his estranged grandfather Sebastian on a Montana Indian reservation, he expects to hate the man, but instead learns to trust and forgive him. In this young adult novel, author Trisha Davis weaves a tale of remorse, second chances and heroism as Buddy confronts his Kootenai grandfather during a wildfire season.

When Buddy was a toddler, he, brother Chris and their mother were visiting Sebastian in Montana when, in a drunken rage, Sebastian told their mother to “crawl home” to her “white boy,” her Caucasian husband, and take her “mongrel” sons with her. In tears, she fled with her sons. As they headed down the highway, a truck forced their car over an embankment and she was killed.

The boys and their father didn’t hear from Sebastian until a letter came inviting Buddy to visit. Could Buddy forgive him? Buddy’s father insists his mother would’ve wanted him to go, and after Sebastian shows remorse, teaches him about the forest, and displays other redeeming qualities, Buddy finds it harder to hate him.

The two settle into a truce, but other issues flare up. Buddy ignores Sebastian’s warning about wildfire danger and plays with firecrackers in the forest. Then, a wildfire threatens the cabin, and Buddy learns that his friend Emerry has disappeared. Will he and friend Dave find her in time?

Wildfire! deals with alcoholism and prejudice in a productive, gentle way, though readers may wish Davis had more deeply explored Buddy’s Indian heritage, the causes of Sebastian’s drinking and his antipathy toward intermarriage. Otherwise, this well-written, illuminating story could help readers find forgiveness in their own lives. It also explores what heroism means and offers intriguing facts about wildfire danger.