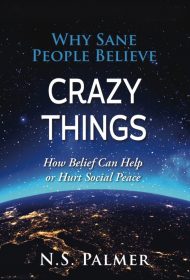 N.S. Palmer’s Why Sane People Believe Crazy Things provides a multidisciplinary analysis for the communication breakdown in these divisive times. Focusing on why some disagreements create tribalism while others are trivial, Palmer applies philosophy and religious scholarship to illuminate what it means to hold a belief, show why beliefs often divide us, and argue that divergent beliefs conflict less than we realize.

With the thought experiment of an argument between conservative and liberal relatives as his springboard, Palmer launches into defining what a belief actually is, and why we regard some views as crazy, others as sane. According to Palmer, while we may think we have an empirical basis for our beliefs, most of us don’t have intimate familiarity with the evidence. Our justification for those beliefs, then, is more about how they help us function than about evidence.

Unfortunately, Palmer diverges considerably from his original thought experiment, offering suggestions for current conflicts only in the final chapter. Despite his clear-headed interpretations of philosophers’ and theologians’ theories of belief, failing to return more frequently to the original problem diminishes the project’s urgency.

Additionally, while Palmer rails against the relativism introduced by postmodernists, his pragmatic view that beliefs aren’t justified by how they correspond to reality but by the functions they perform changes the conversation about beliefs from “what’s true?” to “what works?”; the result is to lend some credence to the false equivalency that divergent views tend toward equal validity—a kind of relativism all its own.

The prescriptions arising from Palmer’s epistemology are a blend of federalism and libertarianism, mixed with skepticism about the sustainability of multiculturalism. Palmer’s confidence in analyzing the problem is not matched by his skill in addressing it, and he ends up undermining his argument by falling back on his specific political ideology.

This is an ambitious survey of philosophy and religious thought on the topic of belief. Unfortunately, the appeal of the author’s views and suggestions may vary considerably according to the reader’s ability to overlook the issues mentioned.