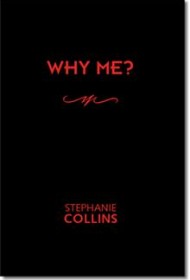 The teenagers who populate Stephanie Collins’ young adult novel Why Me? are funny and foul-mouthed, obsessed with sex, and at war with their parents. In other words, normal.

But not so fast. They’re also lugging around a bunch of rough-shelled eggs, each the size of a dozen ostrich eggs, which have an unnerving tendency to glow upon occasion. The discovery of the eggs coincides with a number of strange events in their town. Storms. Explosions. The mysterious disappearance of several townspeople.

This is dramatic stuff, and ostensibly the central theme of Why Me? But it feels mostly like backdrop to the drama of 17-year-old Skyler’s home life. He narrates this slender novel that focuses as much on Skyler’s violently punitive stepfather, Louis — aka Louzer — as it does on the kids and those eggs.

The battles between the two are epic, with Skyler giving as good as he gets. The tension between them ratchets higher still when the eggs begin to hatch. It spoils nothing to say that the emerging creatures are friendly, bonding quickly with the kids. But there’s nothing cute and cuddly about their adult counterparts. Cue the scary music, and draw the spoiler line here.

Collins’ portrayals of teens on the cusp of adulthood are spot-on, and she gets their affectionate, profane one-upmanship just right. The problem with Why Me? is that the kids prove far more interesting than the creatures they’ve unearthed. Readers will care at least as much about Skyler’s inevitably thwarted fumblings toward sex with his girlfriend as they do about whatever havoc the creatures might wreak.

While Collins renders that destruction in great and gory detail, the real surprise at book’s end is Louzer, who finally sheds his one-dimensional shell. Why Me? is the first of a series, followed by Why Me? Part Duh and Why Three? Partly Me, titles that hint that whatever happens to Skyler, his appealing smart-alec attitude remains unbowed.