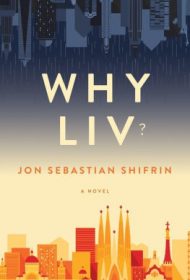 Jon Sebastian Shifrin’s novel, Why Liv?, centers around a corporate drone and his search for meaning in his life.

Liv, as he’s called, is a 20-something living in Manhattan. He’s bored with his job, annoyed with his apolitical yet beautiful, ambitious girlfriend Gita, and fed up with the current political climate —particularly the Comitans, a political group that resembles Republicans, and presidential candidate Edward Schmidt, a radio personality who mirrors the current president, down to his orange pompadour hair and campaign slogan of making the country great again.

Eventually, Liv is driven to quit his job, break up with Gita—and head to Spain to find himself. As the story unfolds, Liv meets the love of his life and discovers a new path.

Shifrin’s novel is often a highly amusing ride. His narrator’s descriptions of everyday corporate life recall episodes of The Office and the cult hit, Office Space. For example, at one point, supervisor Marcy lectures Liv on his work failures: “You haven’t reported your weekly recycling activity for six weeks, nor have you opted in to the office’s composting plan. You missed your rotation for turning off the lights at close of business -twice – and I heard you’re even printing one-sided documents.” Fans of the series and movie, will likely revel in parts of Why Liv?

But while some sections will have readers laughing out loud, others prove frustrating. Throughout the story, Shifrin tells more than he shows. For example, after the above passage, the narrator then lectures readers on how wrong and vacuous Marcy is. Readers may tire of hearing every thought in the character’s head—including all of Liv’s musings on life and meaning. Conservative readers will also likely be turned off by Shifrin’s blanket descriptions and insinuations of today’s politicized climate.

Still, liberal readers and fans of existential philosophy who are willing to overlook the story’s flaws should enjoy the questions posed here.