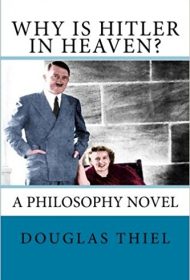 In Douglas Thiel’s philosophical novel Why is Hitler in Heaven?, a Vietnam veteran and ex-cop turned community college philosophy professor named Hasher finds himself in an unusual afterlife.

After dying peacefully in bed, Hasher awakens in a world created by advanced humans who have learned to manipulate the time-space continuum and to reconstitute human consciousnesses into replicas of their original bodies, placing them on manmade planets with specific themes. (Hasher’s planet, called Philos201, is for philosophers).

Exactly why these future humans (aka “fumans”) have chosen Hasher, or the purpose of resurrecting anyone, for that matter, remains mysterious; but most alarming to Hasher is the discovery of the most infamous resident of Philos201: Adolf Hitler. Hasher grapples to reconcile the meaning of this strange new world and his sense of justice against the backdrop of his own personal trauma, and is ultimately forced to decide whether and how to confront the architect of the greatest tragedy of the modern era.

Some readers might find Thiel’s narrative slow; it’s peppered with extensive military history, re-told sexual encounters, and even digressions about American cinema. But every scene serves to further characterize Hasher or flesh out his truly original vision of an afterlife. Indeed, this sprawling narrative poses big philosophical questions about restorative justice, the existence and nature of a higher power, and the meaning of forgiveness, all while developing intricate, intimate relationships between empathetic characters.

That’s not to say that Thiel hits every note. His formatting (block paragraphs without indentation or spacing between them and multiple characters sharing dialogue in a single paragraph) can disorient the most diligent reader, and those expecting tidy answers to even the most basic questions (including the one posed by the title) may find they’ve come up short.

That said, this remains an impressive achievement: a stunningly original vision which, in true philosophical fashion, poses more questions than it answers but provides a genuinely human experience as profound as it is entertaining.