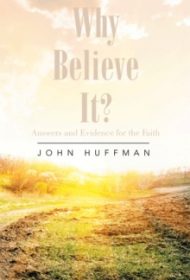 In a series of well-written and finely argued essays, author John Huffman examines why Christians believe some of the basic tenets of their faith.

Beginning with creation, the author offers a pointed attack on scientific materialism, which denies any possibility of the existence of God. Huffman isn’t a fundamentalist and acknowledges that biochemical realities like RNA and DNA are “repositories of biological information,” but questions where the information contained therein originated. Science doesn’t have an answer, and, as Huffman argues, theorists should check their arrogance at the door when it comes to proclaiming that chaos and evolution hold complete answers to questions on the origins of the universe.

Huffman covers a lot of ground, examining commonly held beliefs concerning the human soul and looks to clarify the proper understanding of heaven. He examines why it’s important to accept the virgin birth of Jesus; attempts to decode what is meant by the Second Coming; and offers some ideas on the meaning of certain visions in the book of Revelation. Moreover, he wants to set the record straight when it comes to biblical prophecy, arguing that passages about the end of the world noted in New Testament were “not about events to occur in our future, but events to occur in the first century generation of Jesus and his disciples.”

Huffman shines most brightly in two chapters that look at the beliefs of early Christians. His chapter on the concept of “the blessed hope” (the idea that the Christian message is ultimately not about saving people from hell fire, but embodying the perfect expression of love) and his exploration of the pre-Nicene Council understandings of the Trinity, as well as a look at Old Testament scriptures that foreshadow the concept of Father, Son, Holy Spirit, are smart, well-presented, and expertly researched.

Overall, Why Believe It? is an intelligent examination of Christian beliefs and a fine book of apologetics that is recommended for Bible study groups.