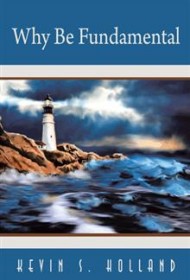 When you love something, you take that something very seriously. Kevin S. Holland loves his Baptist faith, and in his book, Why Be Fundamental, he comes out with two guns a’blazing in defense of his religion and in support of a strict adherence to the written word of God in the Bible. “In recent years,” he writes, “there have arisen those who claim fundamentalism and teach the exact opposite.” Holland’s mission is to set the facts straight, as he sees them.

In a little over 120 densely packed pages, the author explores the doctrine of salvation from sin, the nature of Baptism, hell and who deserves to go, the heresy of ecumenism, and what is really meant by God’s Universal Church. Citing copious scripture references, his exegesis is pointed and fiery. His apologetics, to say the least, are unapologetic and he doesn’t mince words when it comes to faiths he believes skew God’s revelation – namely Catholicism, which “claims ‘Christianity,’ but is pagan in doctrine…[an organization] stained with the blood of millions and still claims authority over the scriptures, which in this writer’s opinion was stolen” and Presbyterians who were spawned “from their whore mother the Roman Catholic Church.”

These are strong words, and textually, the book is not easy reading. Holland moves at a fast and aggressive pace and readers without a solid understanding of sacred scripture will find themselves at a loss. Moreover, the book is in great need of a copyeditor to correct the many disjointed sentences, grammatical errors and typos in the text (including one on the back cover).

Holland is a firebrand, and like-minded readers looking to reinforce their already deeply held Christian beliefs will find much to agree with here. Readers outside the fold, however, will have a tough time coming to this book. That’s no matter for Holland, whose goal was never to “gain notoriety or even become famous as a result” but to glorify Christ.