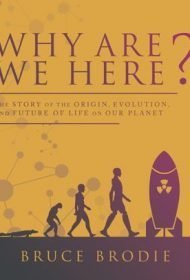 Bruce Brodie writes that Why Are We Here is an attempt to “develop a synthesis” of ideas from experts on the topic of human evolution and where that might take us,” and present [them] with a unified perspective for a general audience.”

The first four sections cover the evolution of life from earliest beginnings to the appearance of Homo sapiens. In part five, he shifts attention to humankind’s behavioral and moral development and the rise of consciousness. In the final section, he analyzes what he sees as the possible human future.

This is a bold undertaking, but in trying to cover so much, Brodie is often forced to gloss over explanations, leading to confusion. For example, he explains that chlorophyll absorbs light in blue and red wavelengths and reflects green light, then notes scientific speculation that chlorophyll may have developed in response to the dominance of purple bacteria. Because there’s no explanation of how light wavelengths create the colors we see, readers will have trouble fully understanding the implications of this passage.

The greatest shortcoming is at the end. Although Brodie touches on the future integration of human brains with computers and the bioengineering of humans, the discussion seems to make light of the risks of misuse and eugenics. Additionally, he notes that humans “have inherited the responsibility to ensure the future for ourselves and for all alike on our planet,” yet throughout, his focus is on human survival, even including eliminating death, with little emphasis on the damage human beings have done to the planet and other creatures.

The book’s audience is unclear. The scientific material is too cursory to intrigue scientists yet still lacking context for someone new to the material.  If Brodie had focused on the topics in the last two sections and included hard discussions about the ethics of modern biological and technical advances and their possible effects, he would have offered all readers something more satisfying to chew on.