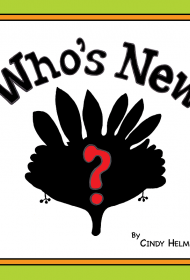 Artist and author Cindy Helms introduces a new character to her fictional town of Ponderville in the picture book Who’s New?

Helms’s previous picture book Outside, Inside introduced “Birdie” and a number of other inhabitants of Ponderville. Ponderville’s population sits at 19, until the opening pages of Who’s New?, when a car pulls into town, loaded with luggage. A paper silhouette is dropped from the car, and the Ponderville residents compare it with their own varied head shapes, attempting to figure out “Who’s new?”

These comparisons propel the book, as characters ask readers to decide if the silhouettes presented match or not. It’s an interesting and imaginative interactive aspect that should especially appeal to younger children. Eventually, a match is made, and “Alphabetty,” the new resident, is introduced.

Helms renders the book in colored pencils and pens, and while some readers might not like the slightly rough-hewn look this creates (with patches of uncolored white showing through the green grass or gray stone, for example), it sets a warmer tone to the book than strict computer coloring would offer. Clearly, Helms has spent considerable time designing the large cast of characters; their unique appearances, color schemes, and personalities come through, even with very little dialogue.

There’s not much of a plot, per se, and that’s one area that might deter a slightly older audience (first grade and above); there’s also little nervousness shown from either the newcomer or the residents, just excitement and curiosity, which seems a lost opportunity to model how such feelings can be overcome. But for younger children, the simple, bare-bones text (“Is this who’s new?”; “Birdie wants to find who’s new”) and the focus on recognizing shapes will prove enjoyable. Who’s New? shows Ponderville’s potential for additional stories in the future, but the book also stands alone as a cute and colorful labor of love.