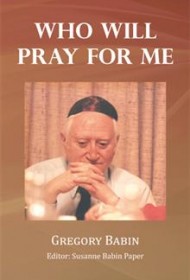 In this novel of three generations of a Jewish family, each generation hopes to have a son who will say the Kaddish, the prayer for those who die.

The book follows Jacob Levin and his family from Russia to America. Once settled, Jacob’s daughter marries Benjamin Kahn. They have a son Jake, whom they are counting on to say the prayers for the family. But Jake is a lost soul whose placid nature hides a sullen, violent heart that may not let him take up the mantle.

This is a confounding book. At best, this was Gregory Babin’s idea of a wink and a nod at the generational novels that first became popular in the late ‘70s and ‘80s. At worst, it’s Babin’s misogynistic fantasy. His character Jake tries to be a good person, only to be thwarted by women at every turn. “Fortunately Jake learned very early the most valuable lesson…which many men don’t learn during their whole lifetime…In his mind, the world was made up of a large number of unreasonable women. He decided to meekly and rapidly do exactly as he was told.”

The sexual talk in the book is, in a word, crude. Jake’s future bride Julie sets her cap for him at the advice of her mother: “Julie, no more running around with men who give you hemorrhoids by poking their dirty fingers up your asshole. You are now ripe for the picking by a Jew who will marry you.” Married for the wrong reasons, Julie torments Jake, causing his nervous breakdown.

Babin passed away in 1988 and his daughter Suzanne Babin Paper completed the project. She acknowledges: “The situations are contrived. The actions of the characters are etched in a manner purposely to be outrageous or extreme.” Taken in that way, Paper has done her best to honor her father, even though the book is unlikely to find an eager audience for the very reasons she notes.