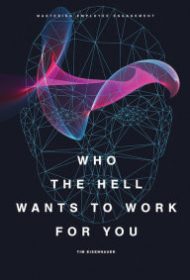 Pity the new business owners who launch their companies with outdated mindsets about how to attract and retain employees. They will soon discover an inconvenient truth, writes Tim Eisenhauer: Job candidates’ expectations have changed rapidly. They are no longer willing to trade mindless tasks with no discernible social redeeming qualities for an almighty paycheck.

Eisenhauer’s in-your-face title sets the tone for challenging old-fashioned conceits. The author stresses that allowing employee empowerment leads to worker satisfaction and, ultimately, to company success. By contrast, not managing to employees’ priorities invites negative consequences and results in a brain drain where the most driven and talented workers seek jobs elsewhere.

In a straightforward, compelling narrative, the author examines how to motivate employees with commonsense strategies: recognizing hard work, utilizing active listening, setting appropriate goals (not too hard, not too easy) and more. Overall, he writes, “Nothing motivates like being in charge. Whenever possible, let your people call the shots. Let them work on their ideas and see the fruit of their labors.”

Eisenhauer strengthens his case by including advice from diverse experts, including the usual suspects (Facebook’s Sheryl Sandberg, IBM’s Thomas Watson Jr., etc.) but also those less common in management books, such as Dilbert creator Scott Adams and Newman’s Own financier and actor Paul Newman. Their perspectives blend irony (Adams’ observation that a boss’ deep psychological need to “help” often has no relationship to his abilities or a worker’s needs), contrarian opinions (David Letterman’s remarks on the value of “stupid stuff that works”) and strategy (“Quote me as saying I was mis-quoted”—Groucho Marx).

In a world where the types and numbers of jobs are predicted to shrink dramatically in the future, it’s sobering and instrumental to know that job seekers, despite the increasing competition for work, are still holding out for fulfilling work. It’s a fact that Who the Hell Wants to Work for You eloquently argues—one that business owners should take to heart.