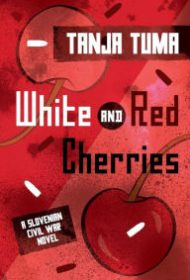 White and Red Cherries, Tanja Tuma’s second novel, illuminates the complicated history of Slovenia during World War II and in the new Yugoslavia, offering a compelling picture of war’s hardship and its ongoing effects on survivors.

In 2014, siblings Anna and Martin, both nearing 70, attend a roundtable discussion on the consequences of Slovenia’s Civil War. “Even now we remain children of war,” they assert. The novel goes on to focus on the years 1943–1949 to show how the country’s wars have cast a shadow down the decades.

Valeria Batič lives with her friends, sisters Ada and Marjana, in a small village near Trieste. Her hatred for the occupying Italians leads her to join the Communist-led guerrilla movement. Meanwhile, Ada’s new husband, psychiatrist Andrej Strainar, belongs to the opposing political group, the Home Guard. Despite that rift, when the Strainars flee to Buenos Aires, Valeria agrees to raise Ada’s son Martin as her own.  Only later in life does Martin discover his true parentage.

As the story unpacks the intricacies and horrors of the war, it wraps many characters into the tale. The narrative’s chronology is fairly complex, but Tuma makes it reasonably easy for readers unfamiliar with Slovenia to follow by including a map, background information, and a glossary listing notable figures and places. Two minor characters’ backstories offer intriguing historical side notes: Marjana witnessed the horrors of war as a nurse and is devastated by her experiences, while Andrej’s sister Sanja, a concert pianist, experienced a repressive atmosphere in Stalin’s Russia.

Tuma translated the novel into English, and some awkward phrasing and incorrect grammar exists. But the prose is largely fluent and even poetic in places, as in: “Winter white, winter cold, winter of 1944.”  The title sets up a metaphorical framework—with red representing Communists and white the Home Guard.

Overall, the strong characters and skillful prose make this an unusual window into the era — and a compelling and worthwhile read.