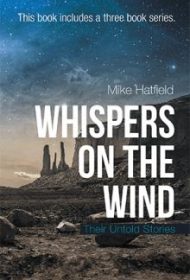 Mike Hatfield’s hefty novel, Whispers on the Wind, offers a portrait of America in the years from the aftermath of the Civil War to the period following World War II.

As the narrative opens in 1872, young Zeke, fleeing family feuds in West Virginia, joins his Uncle Lem, a grizzled frontiersman in the Dakota territory. The two settle in a Sioux village where Zeke falls in love, marries according to tribal custom and fathers a child. Unfortunately, he does this twice, with different women, leaving him with two wives who spend much of their subsequent lives plotting against one another.

The focus then shifts to a lawman on the trail of a particularly sadistic mass murderer. As the bloody and relentless pursuit progresses, the author introduces others who will later evolve into central characters and whose lives he will frequently revisit, a practice he regularly employs with other personalities in succeeding situations throughout the novel.

Unfortunately, the author struggles to hold all these personalities and plots together. Told in a series of brief, vaguely related episodes, the fiction jumps from theme to theme in what seems an effort to touch as many of the period’s historical bases as possible. But doing so tends to break off many of these individual vignettes before readers are fully engaged, and so we cut from an old man in 1937 claiming to be Billy the Kid, to women who plot (“Catherine’s manipulative mind began to work”), Nazis who scheme to steal what they imagine (falsely) is an American secret weapon, terror, madness (“He is mentally disturbed in the worse way I have ever come across”) and more. Although largely organized chronologically, the author’s practice of jumping from episode to episode makes it difficult to keep track of them all.

Hatfield attempts to resolve all the confusion by having many outcomes determined by a recurring image from Sioux cosmology: a strange star exuding even stranger powers, bent toward either good or evil depending on which specially endowed human employs them. (“He raised his hand concentrating his power to bowl her over down the long flight of stairs … but nothing happened… some force would not allow him to touch her….”) The impact of this heavenly body often leads to tension and sometimes to stalemate, but whichever, each appearance is clearly part of an effort to bring disparate elements together— an effort that only occasionally works.

The prose also suffers from copyediting lapses, including “latter” for “later,” “alas” for “alias,” “puck” for “puke” and so on.

Although overly long and crowded with plot twists, a multitude of characters and a confusing mix of genres—with elements of historical fiction, adventure, romance, fantasy, horror and mystery—the novel resonates with a certain realism as it explores some of the major issues and attitudes of the time. While its jumpy plot constructions make the narrative hard to follow, they capture the turmoil of the period and suggest several themes that still echo today.