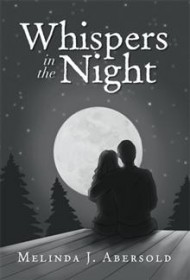 Melinda J. Abersold has constructed an intriguing Christian-oriented romance with Whispers in the Night.

Main character Ruthie has chosen Buddy to be her husband, but the relationship faces several hurdles: Buddy’s faith in God is weak compared to Ruthie’s, and he chooses to spend a lot of time with Rex, his childhood best friend who lives a non-Christian lifestyle; Ruthie worries that Buddy’s mom won’t like her; and Buddy’s sordid past adds further complications to the relationship. Buddy admits he made a mistake in having a one-night-stand with a woman named Marcy, who is now pregnant and claims the child is his. But is Marcy lying? Compounding Ruthie’s life further is that she has run away from her own loving mother to marry Buddy.

Ruthie and Buddy’s relationship takes center stage in Whispers in the Night, but Abersold includes romances between several other characters as well. She cleverly introduces plot twists that keep readers guessing.

Abersold is sincere in teaching a godly lifestyle through her characters, but faith comes so easily to these characters that they seem more unrealistic as the story unwinds. Every character (minus the conniving Marcy) prays at every turn, it seems. The characters might have distinguished themselves better in readers’ minds had Abersold included at least a few who have doubts.

Some details of the setting are problematic, as well. Ruthie’s poodle skirt corresponds well with 1959, but a woman pastor, the use of the word “dude,” and a discussion about secondhand smoke seem better suited to our modern world than the ‘50s.

In addition, the book could have used a more thorough proofread to correct errors such as incorrect words (“think” vs. “thing”; “he” vs. “she”) and missing punctuation.

Those who can overlook such issues will find much to enjoy in Abersold’s plot, though more attention to realistic character development would be helpful.