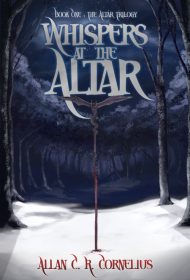 Two very different protagonists struggle against a common foe in Allan C.R. Cornelius’ epic fantasy Whispers at the Altar. Across nearly 600 pages, Cornelius spells out a conflict that spans thousands of miles in a fantasy world peopled by humans, elves, dwarves and gruesome, fantastical monsters.

Steven first faces the dormant god Ssanek as a 13-year-old boy, when his crazed mother attempts a heartless sacrifice. Stretched on an altar in a dark and dreary swamp, the human boy faces the monstrous minions of an evil entity intent on resurrection—a new life that Ssanek can only summon through an untold amount of sacrifice and blood.

Meanwhile, Christabel’s fight against the dark god takes a more gradual course. As a child, the half-elf, half-human reports to the Elven nation of Ellsabe, as well as the Roost, a center of learning and lore in the home city of her dead mother. As she deals with prejudice from the students and elders at the Roost due to her dual heritage, Christa contacts Ssanek, who promises the resurrection of her mother.

Though they face the same evil, the arcs of these finely sketched characters are completely separate in Cornelius’ richly imagined world. The book spans five years, and the author offers dual storylines infused with magic, action, political intrigue and fanciful characters common to any good epic fantasy. Their dual struggles tie together in the end, a fusion that’s both satisfying and unexpected.

Cornelius’ eye for detail is consummate across hundreds of pages, and his prose is consistently dynamic. Still, the pace inevitably falters in certain stretches across the nearly 600 pages; amid lengthy descriptions and extended scenes in the Roost, casual fantasy fans may be overwhelmed by the sheer heft of this debut. Even so, the author’s precision and care for creating strong, believable characters helps balance his occasional wordiness.

Overall, Whispers is a promising debut—one that will make readers eager for more in the planned trilogy.