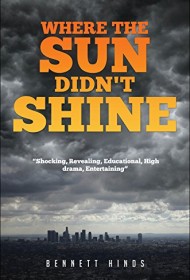 This story, which appears to be a work of “true crime,” reads like a novel. Set in Harlem in the early 1970s, it follows Bennett Hinds as he joins the NYPD to try and make a positive impact in his crime-ridden Harlem community. Public distrust of the police by black and Hispanic citizens has kept the police frustrated and ineffective. Hinds is chosen to be part of the PEP squad, an elite group who serves the community, and also lives among them. Their good work is undermined by white officers whose racism is not just cruel, but fatal.

Where The Sun Didn’t Shine captures the drama of Hinds’ career arc well. At one point, he has a cup of coffee with Frank Serpico, whose famous story roughly parallels his own. There’s also moral ambiguity. The pimps and drug dealers are unquestionably bad, but some squad members use drugs on the job, apply excessive force to send a message to perps, and act as though they’re invincible. The police are on the side of good, but they’re no angels.

Hinds can set up a scene well, and his action sequences are crisp and often chilling. A few quibbles: He often shifts tense mid-sentence, as in “a Caucasian cop with dirty blond hair unlocked the gate and enters,” which is confusing. And the book is identified as “true crime,” with the author and main character both named Bennett Hinds, but the back cover copy describes the book as “events inspired by a true story.” Which is it?

Either way, fans of true crime or crime fiction who are interested in this time and place will appreciate Hinds’ gritty tale of justice and corruption on the mean streets of Harlem.