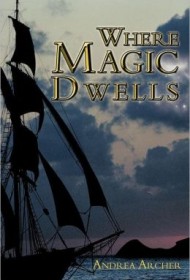 The universe sketched out in Where Magic Dwells should be familiar to fans of the fantasy genre. It’s a world where fairies casually wield magic, where wizards, princes and warriors face supernatural foes and set out on noble quests.

Author Andrea Archer doesn’t waste much time in creating this world, jumping right in to the exploits of Prince Jason VanLord and his loyal comrades. Ben, a bumbling magician, provides comic relief; Adel is the counterweight, a noble archer intent on protecting her prince; and Oren plays Adel’s male counterpart, a stern, silent, skillful warrior.

Mia’s nefarious intentions become clear when the quartet survives an ambush in the woods and meets a mischievous fairy that speaks of a struggle for the future of the world. The group must journey to a magical island to reverse an evil plot. Along the way, they battle mystical creatures, magic spells and other adversaries.

While the plot is standard fantasy fare, Archer fails to bring it to life with depth and excitement. Her two-dimensional protagonists and villains aren’t given the proper space to develop and grow. Combined with a sloppy narrative style that relies too heavily on simplistic, clichéd prose (the author’s favorite adverbs seem to be “slowly” and “quickly”), the tale lacks any real magic or wonder, though it might appeal to less discriminating fans of the genre.