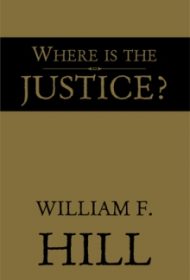 William Hill’s autobiography, Where is the Justice?, details a life of hard work and steady progress interrupted by the 1990s Vermont bank failures, duplicitous bank officers, and questionable practices of the FBI and FDIC.

Born in Hardwick, Vermont, in 1935, Hill begins by discussing his life before an injudicious purchase of a Days Inn motel propelled him into a downward spiral. He describes his early years helping in his father’s potato field and feed store, establishing his own dairy, and, later, developing into an auctioneer, real-estate broker and landlord. Among other family members, his second wife, Charlotte, has a cameo biography emphasizing her hard work and ingenuity.

Hill affirmed an ethos where “a man’s word was his bond.” Accustomed to informal relations with his local bankers, he accepted their claims, in September 1990, that a failing motel was profitable, that a required new Day’s Inn franchise was in place (it wasn’t) and that he could use two properties—one of which he had yet to purchase—in partial trade for the motel.

After purchasing the motel, Hill learned it was losing money and was worth considerably less than the purchase price. Subsequent events included the bank’s failure and the prosecution of the bank’s officers, the FBI pressuring Hill into pleading guilty for a fraud he felt he didn’t commit, and the FDIC holding Hill responsible for the original, overvalued, motel price. The FDIC also failed to give Hill credit for $51,415, which they’d removed from his bank account.

Hill is understandably bitter, but this attempt at vindication founders in minutiae. Few readers will have the patience to read the documents and play-by-play accounts used to substantiate his claims. As a David v. Goliath struggle, the narrative would be more convincing if placed in the historical context of the ’80s and ’90s New England Bank failures, with portraits of other victims. His prose also suffers from word confusion (i.e. “herd” for “heard”) and punctuation errors.

Ultimately, this book requires revision before it’s likely to appeal to those beyond the author’s inner circle.