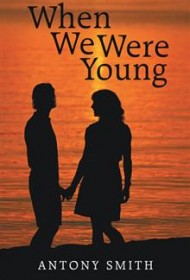 When We Were Young is a sprawling tale that follows the Mitchell family, beginning in 1939 and spanning over half a century. The book’s main focus is Jim Mitchell, who is depicted at the beginning of the story in his teen-age years during World War II, which are spent in an English village with his friends and family, especially his cousin Maggie.

Jim seems uninvolved in wartime efforts. Rather, he fixates on Maggie, with whom he becomes increasingly experimental sexually, until family members intervene. The frank discussions of sex and feelings between the young people and the adults are at odds with the reticent 1940’s, as is the mention of Jim’s mother’s running shoes and attire to maintain fitness. A family dinner in 1943 with lamb, wine and imported tea during the height of Britain’s rationing also rings false.

With limited transitions, Smith carries Jim forward to his adult years as he travels the world as a marine engineer and later as a major executive in a rapidly expanding hotel chain. Throughout, the one constant is Jim’s pursuit of women, all of whom sound alike and who, like Jim and his family, use “bloody” and “damn” with boring regularity. The over-written sentimental language will likely deter men, just as the details of ship life and the corporate world may deter women.

Novice writers are often instructed to capture their readers in the first page. Unfortunately, when that page – and most subsequent pages – are rife with punctuation, capitalization and sentence structure errors, the opportunity is lost, regardless of the story’s merits. In this case, however, the structure, tone and characterizations are equally unpolished. Less is more. In light of the fact that Smith has produced a book that’s 700-plus pages, he would do well to study the short classics of Hemingway and Steinbeck in the interest of tightening his work.