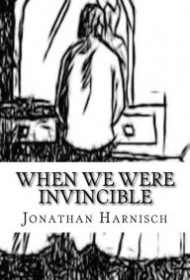 Author Jonathan Harnisch often writes about alter egos who live with the same mental disorders that he does, including schizophrenia and Tourette’s syndrome. The protagonist of this coming-of-age novel is Georgie Gust, a character who has appeared in the author’s previous novels as a sexual fetishist and even another character’s alter ego. For readers who may have explored other Harnisch novels, it’s best to think of Georgie as the blank canvas on which the author hangs his tales and not try to unify Georgie’s mythology.

Here, Georgie appears as an angry young man in the mold of Salinger’s Holden Caulfield. He’s been banished by his alcoholic mother to a boarding school in Connecticut and we meet him during a suicidal episode in a graveyard. Georgie experiences his mental illness as a literal monkey on his back; he is also dangerously self-medicating. The prose is as electrifying as it is terrifying. “Out of the wild jungle one day, rejoining me in full costume, the horn-headed monkey returns to its residence in me,” Georgie says. “This time, it was going to try and kill me, the son-of-a-bitch.”

The majority of the novel concerns Georgie’s relationship with classmate Claudia Nesbitt, and hijinks with his buddy “Fitzie.” Georgie has thoughtful debates with his Catholic girlfriend about the nature of God and she encourages him to embrace his mental illness, even as his self-destructive nature threatens to destroy him. Much like the title character in Good Will Hunting, Georgie’s redemption is somewhat expedient, but the character’s voice is utterly compelling and Harnisch inhabits his troubled young hero with compassion and grace. A bittersweet postscript finds Georgie still struggling but determined to triumph: “The consciousness of life is higher than life, and the knowledge of happiness is higher than happiness,” he notes. “And, that’s what we have to fight against. I’ll continue from now on to fight.”

The author’s authenticity no doubt comes at great personal cost, but his writing is elevated by his personal experience. This story deserves an admiring audience.