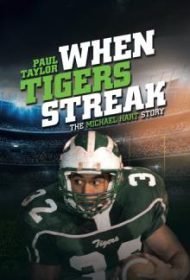 Hardcore football fans know the name Mike Hart. He was one of the country’s top running backs during his mid-2000s tenure at the University of Michigan, ultimately finishing fifth in Heisman Trophy balloting. His subsequent NFL career was short-lived, owing to injuries, and he moved on to coaching for various college programs.

But before all that, Hart was one of the most celebrated running backs in high school football history. Those years (2000-2003) are depicted in When Tigers Streak: The Michael Hart Story, written by Paul Taylor, one of Hart’s coaches at Onondaga (N.Y.) Central High School.

At Onondaga, Hart set the then-national career record for rushing touchdowns (204) and career points for a non-quarterback (1,246)—despite often being pulled out early from blowout games. Taylor is careful not to take much credit for Hart’s success: “To suggest that we, as coaches, had much to do with Michael’s development as a running back would be a stretch at best,” he writes.

While Hart’s achievements are meticulously covered, the book delivers little insight into the player himself or his life off the gridiron. Rather, it focuses largely on how Taylor and subsequent head coach Bill “Spice” Spicer resurrected the Tigers football program, which was nearly defunct a few years earlier. With Hart leading the way, the school won three state championships.

Tigers is filled with interesting anecdotes and coaching strategies and philosophies on player development. The tone is lively, and Taylor has a knack for scene setting. One fun aside involves the time unruly cattle wandered onto the team’s practice field from a neighboring dairy farm.  Later, Taylor writes, “we chuckled at the realization that Guptill’s cows were the only group that had had their way with us that year.”

While those expecting a thorough biography of Hart may be disappointed, anyone who has played or coached football—or been a parent of a player—will find much to enjoy in this peek behind the scenes.