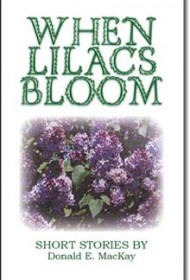 This collection of 15 short stories tackles heady philosophical themes and delivers no easy answers. Among its offerings: A small man, overlooked by his peers, is visited by departed spirits and allowed to become a hero. Creatures battle a black hole that turns out to be a lesson in perspective. A seeker of spiritual truth saves a life, only to lose his own in a tragic misunderstanding.

“The Saffron Robe,” mentioned above, is an example of author Donald E. MacKay’s best work here, incorporating omniscient narration and dialogue, an exciting plot, and conclusion that’s open to interpretation. When a modern pilgrim saves a young girl by killing her attacker, he is himself prosecuted for the attack and killed, and is seemingly at peace with this undeserved punishment. It’s well delivered and thought provoking, and would be eagerly discussed and debated by reading groups.

Many of the stories here unfortunately don’t show that level of editorial polish. MacKay has written several that are told solely through dialogue, but the speakers aren’t clearly identified and quotes aren’t separated consistently, so the speaker sometimes changes without notice. “The Black Hole” is a great bit of science fiction, but it sinks under the weight of all that conversation; a tiny bit of narrative detail to orient the reader wouldn’t spoil the story’s terrific final twist, and readers wouldn’t feel so exhausted by the time they reach it.

Lilacs figure thematically into several of the stories here, but it’s unclear why. Themes of faith also appear regularly, in a way that invites discussion and speculation. MacKay has big ideas and an intriguing worldview; it would be better displayed here with a thorough copy edit and more skillful use of dialogue. As it stands, When Lilacs Bloom may find an appreciative audience among fans of short fiction that packs philosophical thought into unexpected places.