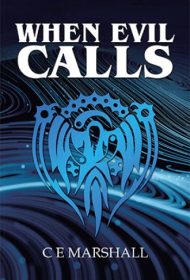 C E Marshall’s When Evil Calls is the first of three science fiction novels with religious overtones in the tradition of C. S. Lewis’s Space Trilogy. The story begins in 2005 when a class of 30 boys and their teacher disappear from a classroom in a British boys’ preparatory school. Found in the classroom instead, in an entranced state, are Chris (the novel’s narrator) and eight other students who were previously in the biology lab. They are now gifted with advanced intelligence and extraordinary talents.

Thirty years later, the mystery remains unsolved, and the nine are suddenly compelled in their dreams to build a communication device and a vehicle capable of travel at multiple light speeds. Using the device, they make contact with one of the formerly missing students who is now on Paxlene, a planet light years from Earth.

Eventually, the men and their families travel to Paxlene, where an evil darkness threatens the population. Guardian angels and some of the planet’s unique animals save the group from this darkness one night. But they will need help from Earth to rescue Paxlene, even as Earth itself faces catastrophe.

Like Lewis’s Space Trilogy, the dichotomy between science and religion is treated in interesting ways here. The story is exciting and fast-moving, and Chris and his wife Mary are empathetic, relatable characters.

Some minor issues distract: While the other eight space travelers accompany Chris and Mary on their adventures, they serve little function; readers will wish to learn more about them, and about the boys and teacher who disappeared years ago. Readers may also wonder: if a whole class was instantly spirited up to Paxlene, why do the nine need a space ship? And why didn’t the Paxlene beings just grab the nine they really needed back then?

Perhaps the answers are in the succeeding volumes, Wormhole and Restitution. Regardless, readers will find it easy to let their imaginations take over as they enjoy the compelling story delivered by When Evil Calls.