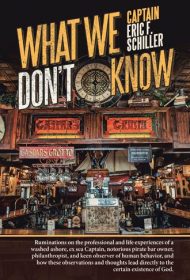 If anyone should be able to spin a good yarn, it would be Eric F. Schiller. His two careers—one as a supertanker captain who spent more than 25 years at sea, the other as a bar owner—provide plenty of fodder. In What We Don’t Know, he combines his life experiences with a philosophy he has developed over the years. “I decided to weave sea stories in among the chapters of a book concerning philosophy and psychology,” he writes, “tempered with theology and probability of sorts.”

Schiller calls his philosophy “noknowlogy,” which amounts to knowing what we don’t know. The more we learn about a subject, the broader the field of what we don’t know grows. Several centuries ago, the pinnacle of medicine was blood-letting, conducted by barbers, he notes. As medical knowledge has grown, so has what we don’t know.

Schiller admits his mental musings aren’t enough to fill a book. That explains the sea stories. “Seagoing just may be the world’s finest, most intensely rigorous education, however informal, unstructured, or lightly documented,” he writes. “And it may be the unintended definition of continuing education because as long as someone is sailing, they are learning through new experiences.”

His stories are by turns interesting, funny and touching. There’s the ghost of crewman Andy Wilson haunting the ship he died on; there are hardened sailors getting misty-eyed while watching a bunch of schoolchildren playing; and there’s the life lesson learned from shipmate Henry Choo: Always carry an unopened bottle of beer in your back pocket.

Schiller’s writing is entertaining and thought-provoking. He has a light touch, even when he discusses serious topics, such as organized religion and the existence of God.

Still, at 124 pages, this offering feels a bit slight, achieving neither a fully satisfying look at a life’s philosophy nor a robust memoir. While readers will enjoy what’s here, many may wish for more.