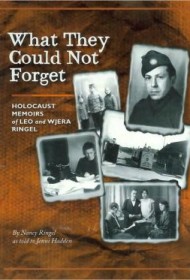 Over many years, author Ringel elicited her parents’ reluctantly told stories of wartime-era persecution. The culmination is this slim and moving, albeit scattershot narrative.

Ringel’s mother Wyera was born in Poland and raised Protestant but was persecuted because her father was Jewish. Ringel’s father Leo, also born in Poland, was a Jew and well-respected teacher. He was interred at Czestochowan ghetto and a series of labor camps, surviving on his quick judgments, the Germans’ grudging respect for the “Professor,” and repeated luck. (One day after he badly injured his finger, he was sent with other “invalids” to the infamous Buchenwald camp. The next day, Leo was shocked to learn that Allied bombers had leveled the armament factory at the labor camp where he had been working previously; no prisoners survived.)

Leo met Wyera after the war and both immigrated to Chicago in 1949. Perhaps because the war left Wyera a bitter, suspicious woman, Ringel’s story focuses on Leo. Unfortunately, she is often forced to fill in many of the blanks in his story. The result is a fractured narrative, filled with frequent speculation. (“It must have been a nightmarish, sick feeling”; “I can only surmise what he felt here, for he never told me exactly.”)

Readers should plan to experience this intimate story as they would a friend’s treasured family album: as an incomplete and sometimes confusing, but valuable historical record. The book’s highlight is nearly two-dozen family photos tucked into a sleeve.