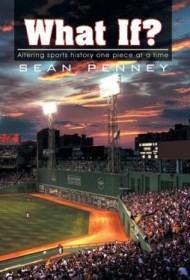 What If?: Altering Sports History One Piece at a Time is a series of essays by sports enthusiast Sean Penney, who looks at past sports stories and imagines them turning out differently. The essays, each comprising a chapter, mostly cover topics related to the NFL, MLB and NBA.

Among the questions Penney considers: “What if Shaq and Kobe could just get along?” “What if MLB had a salary cap?” “What if the 2012 Olympic [men’s basketball] team played the Dream Team?” The degree to which the “what if” conceit informs the text varies from chapter to chapter. For example, “What if Carl Crawford made a routine catch?” focuses far less on the ramifications of that action than on the deficiencies with that year’s team.

Penney knows his subject matter inside and out, and his reporting is top-notch. He’s done the research to ground his points in solid facts. Two chapters about the NBA Draft break down all the scenarios regarding who was drafted (and who wasn’t), including statistics showing why teams would have been better off making different choices. Another chapter makes a compelling case for baseball to make better use of the Wins Against Replacement statistic.

Still, Penney, who writes a personal sports blog, would have been more effective if his chapters sounded less like informal blog posts. Being colorful is fine, but there are far too many exclamation points, and several chapters overindulge in quips or flippant asides (“Yup, that’s right, another steroid scandal”). The book also needs a thorough copyedit. Commas and hyphens are often used incorrectly and names are misspelled, including Santa Claus (spelled Clause).

Finally, a chapter devoted to pro wrestling risks turning off serious sports fans, as does the bookending of What If? in the introduction and final chapter with overlong entries about Penney himself.

Nonetheless, What If? has some interesting perspectives sports fans might enjoy, even if those ideas would play better in a more professional package.