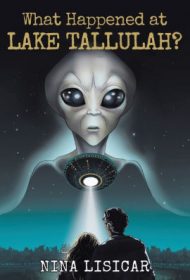 In What Happened at Lake Tallulah?, Nina Lisicar merges romance and speculative fiction genres. Shifting between past and present, the author details the life of Margaux Martin and her extra-terrestrial experiences, as well as her love affair with the mysterious Byron O’Neill.

As a teenager, Margaux goes on her first date with Byron, which ends at the titular lake, only for both of them to be abducted by aliens. During the abduction, she finds herself restrained in a room with a “non-descript ceiling” awash in grey light. When the aliens return Margaux, Byron has disappeared and has been erased from her memory. He reappears to her throughout the novel, however, and she always senses that she has known him before.

As the story unfolds, Margaux unravels the mysteries surrounding her abduction, her relationship with Byron and with the otherworldly Anastasia, Margaux’s doppelganger who communicates with her from another world through the bathroom mirror of her parents’ house.

While the plot has potential, it is marred by confusing authorial choices. For example, sometimes Anastasia communicates to Margaux in “ancient Sumerian,” but this choice of language is never explained. Also, certain subplots, such as Margaux’s divorce from her first husband, are not fully developed and their relevance is questionable.

The writing style needs improvement as well, particularly the dialogue, which is marked by inexplicable shifts in tone. For example, at times Anastasia and Margaux speak with the informality of gossiping teenagers. At other points in the work, Anastasia addresses Margaux in distant, almost ceremonial tones, using phrases such as “Be not afraid…”

The book also suffers from poor formatting, including a lack of page numbers and use of multiple font sizes without explanation.

Lisicar’s work requires revision in multiple areas before it could appeal to a wide reading audience.