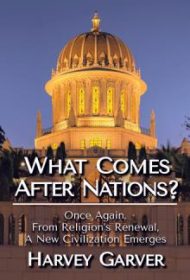 In What Comes After Nations?, author Harvey Garver examines how mankind’s move from ancient hunter-gatherer to farmer to empire- and nation-builder fits into the purpose of religion and, specifically, the Baha’i faith.

Garver notes that at the time of mankind’s origin, hunter-gatherer tribes unconsciously restricted themselves to approximately 40 members because of geographical support limitations. As agrarian lifestyles took hold, the tribes grew, requiring more work to provide food and shelter. Eventually, mankind became territorial of these areas that required so much effort, resulting in the nation-state system common today.

Garver skillfully intertwines this history with the revelation of religion, including a discussion of what the Baha’i faith calls the Divine Educators or Manifestations: Abraham, Krishna, Zoroaster, Moses, Buddha, Jesus Christ, Muhammad, and—in more recent times—the Báb and Bahá’u’lláh, the key figures of the Baha’i religion. According to Baha’i beliefs, he writes, these Manifestations appeared at key historical developmental periods to emphasize teachings necessary at the time.

For example, Garver notes that the Bab and Bahá’u’lláh appeared in the 19th century in the lineage of Islam to prepare the way from the nation-state toward what he sees as the inevitable global one-state civilization. They taught that all individuals have a part in shaping the global future and emphasized the Baha’i concept of the three “Onenesses”: the unity of God, religion, and mankind.

Garver also offers Baha’i-specific history and discusses the faith’s commitment to social action and public discourse, as well as how the religion views modern problems, such as growing income inequality.

This is intriguing material, and Garver is an able historian. While his references lean heavily to Baha’i sources, quotes from the Báb and Bahá’u’lláh sit comfortably beside information provided by noted European historian Norman Davies, the King James Bible, and more. Works that delve into religion can sometimes be preachy, but Garver allows readers a wide berth to make their own decisions about the material.

This is not a definitive scholarly work, but for those who want an introduction to the Baha’i faith and the history of religions, this is a well-written, accessible offering.