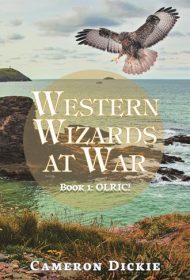 In the first installment of a planned fantasy series, author Cameron Dickie immediately immerses readers into the ambiance of Polzeath Beach, a sandy stretch on England’s southwestern tip that becomes the setting for a conflict featuring mythical figures from England’s misty prehistory.

Three children, James, Jo and Jake (dubbed “the 3Js”), are visiting their uncle’s farm at Polzeath. They arrive just after 10-year-old Lola Mendes has disappeared —one of the first signals of trouble in the normally sleepy region. It’s the initial move in a broader plot by a group of mythical villains, and the community is searching for her when the 3Js arrive. The villains’ plot becomes even clearer when the young heroes discover a seemingly ancient bell on the beach, a find that hints at Lola’s whereabouts and the baddies’ ultimate aims.

The bell, it turns out, holds mystical powers. When a group trying to recover it, led by the villain Olric, attempt to kidnap the children, a trio of knights in shining armor launch a daring rescue. The children escape and ultimately discover that the villains have ties to Morgana Le Fey, King Arthur’s legendary nemesis. The knights, meanwhile, are the storied heroes of the Round Table, and they’re intent on derailing Morgana’s plot to destroy Britain.

Dickie is clearly enamored with the history and myths of Cornwall, and every element of this story reflects some piece of local history or modern ambience. The book follows in a proud tradition of British children’s literature; the young heroes and their epic adventure echo works by authors like C.S. Lewis and Frances Hodgson Burnett.

Dickie’s conversational narrative style also summons comparisons to this tradition. As he writes about monsters from the underworld, legendary wizards and magical knights, the author offers a dry and precise voice.

That approach lends for some slow moments, but overall, the book is an entertaining romp, especially for young readers looking for fantastical characters and hints of history.