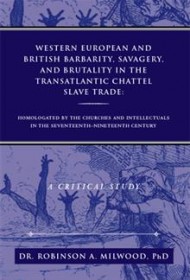 In this volume, black theologian Robinson A. Milwood chronicles in sickening detail the depravity of European and British peddlers of human flesh through three centuries stained with torture and barbarism, resulting in the mass destruction of families, cultures, entire bodies of memory—all of it with the complicity of what he sees as immoral white Christianity.

Among many subjects, his book surveys the gruesome tortures slaveowners inflicted on their chattel, the false arguments intellectuals used to rationalize the cruelty, the timelines of emancipation and, startlingly, the lingering damage slavery still does to African cultures, political systems and economies.

The cry of rage that energizes this well-researched study is profoundly moving. And as a raw historical document, this is one powerful book. But the narrative presents many reading difficulties. Milwood’s chapters are disorganized and his tendency to use obscure, multi-syllable words (“veridicality,” “eximious,” “pellucid,” “entification,” “fraudulency,”  “pestiferousness”) —whose meanings sometimes seem to elude him— seriously weakens his message.

Additionally, the book’s many redundancies will likely exhaust the most indulgent academic. One example: Milwood’s assault on what he believes is the mythology of a world-saving white Jesus invented by Europeans. His argument is often repeated, many times in indigestible prose like this: “All these so-called arguments are only vacuous pulchritudinous embellishments of the egregious profligate unparalleled moral crime ever committed by man—a moral and theological crime against the ultimate supreme being and energy and humanity in the guise of a civilising mission and the Christianisation of Africans with a doctrine of obeisance for the prefiguration of being Africans.”

A skilled editor could help improve the author’s convoluted grammatical constructions in order to create a coherent, unrelenting indictment of the slave trade. Milwood is a tireless researcher (witness his detailed references and ten-page bibliography), and his righteous passion has no limit. One hopes he is willing to subject his heartfelt but undisciplined work to the scrutiny of writing professionals in order to reach a wider audience.