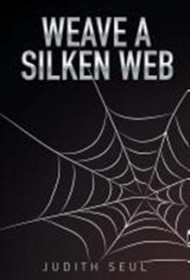 In Judith Seul’s Weave a Silken Web, a 28-year-old woman returns to her childhood home after a 10-year absence to find that her emotionally distant parents have been murdered by a professionally set bomb and that neither she nor her parents were who she thought they were.

That’s a rousing premise, but unfortunately the book has myriad problems with plot, pacing, situations and characters. Through the well-worn convention of a long letter from the dead, Karla Elliott discovers (far too early) that the people she thought were her parents were in a witness protection program and had been killed by the mob. Scenes that should be tense in a suspense novel read like comedy: hitmen are intimidated by two beagles; an elderly mother pulls a gun from her china cupboard; a killer is shot in the backside with buckshot and falls into a barberry bush. Between attempts on her life and an anticlimactic ending, little happens except that Karla redecorates the house that was damaged by the bombing.

Thorough editing could have addressed these issues and removed a great deal of repetition. Expository sections are often repeated, using much of the same words in dialogue. There are countless mentions of how Karla’s parents supported her financially but not emotionally. A human proofreader would have caught spelling and word errors that computer spell check misses: shutter/shudder, fete/feat, internment/interment, plurals vs. possessives.

The faults are numerous and lamentable because Seul writes well, the story has an intriguing premise and it offers an unusual twist, one that could have been made much stronger with an editor’s guidance. Overall, the book fails to deliver a story that will please fans of the suspense genre.