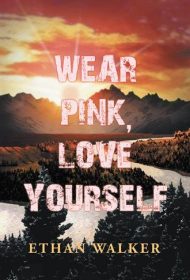 Author Ethan Walker recounts his experiences traveling through Western Europe in search of love, financial security and self-understanding in his memoir, Wear Pink, Love Yourself.

Depressed and desperate to leave his home in post-war Albania (apparently in the 1990s, although the timeframe isn’t specified), Walker sought work in Western Europe. Because he lacked a valid visa, he took up gardening, construction and other manual labor jobs in exchange for room and board.

His postings were temporary, and he lived with a variety of hosts, from a sex-hungry, 57-year-old woman with nine cats to a Krishna community with whom he discussed life and philosophy. Walker eventually traveled to Norway, believing that there he would find paid employment and financial security.

The memoir’s title is associated with a dream he had in which a ghost wears pink, as well as advice from a host who explains that pink is “the colour of loving yourself.”

Walker’s story is written in a formulaic manner, utilizing the same structure to describe each work exchange experience. The narrative concludes abruptly without real resolution.

While there are compelling moments, the author generates little sympathy for himself overall. Any benevolent observations he makes of others are eclipsed by statements such as, “I don’t like gay people” or crass descriptions, such as telling readers one host had a “donkey brain and a piggy body.” Moreover, sexually related comments can be equally offputting, such as, “It was evident that she wanted sex, but I didn’t want to give my dick to an old drunk lady who smelled of alcohol.”

Due to such issues, these pages are unlikely to resonate with a wide audience. However, readers who empathize with a young man’s effort to create a better life for himself against the odds or those who have shared his plight may find Walker’s reminiscences interesting.