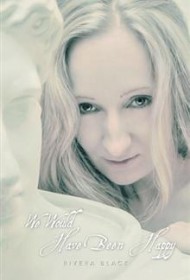 Rivera Black’s We Would Have Been Happy is a book primarily about a romantic relationship that fell apart. In 33 brief poems, Rivera pours out a great deal of heartache, anguish even, over this lost love.

Most of the poems are written in first person and address the departed lover. Unfortunately, the writing is very raw and the poems read like unedited letters. For example, the poem “On The Next Day” begins “Yesterday I fell asleep thinking of you, and this morning I forced/ myself out of this fairy tale where I have been living for the past few/ days. It had entirely slipped out of my mind, how does it feel—to/ be loved, wanted, desired…”

A handful of poems are more creative; “The Sea,” for instance, employs figurative language and imagined actions: “I throw my thoughts into the water for the sea to carry them now…/to take the burden off my shoulders, to break it into grains of sand/ and bury them in its depths. / I will not longer be the slave of my thoughts, I am their master!” Although the language here is not original, the psychological movement is compelling.

The book’s formatting makes it difficult to read. The font is tiny and the printing looks as if it were executed in draft mode, making it extremely hard on the eyes to decipher the entries, word after word.

We Would Have Been Happy might attract readers with its universal theme: the painful struggle to process and recover from a failed relationship. But because most of the poems read more like diary entries than finished works of poetic art and due to the general lack of imagery and musicality, the pieces generally read like ordinary prose. As a result, the book isn’t likely to fully engage an audience.