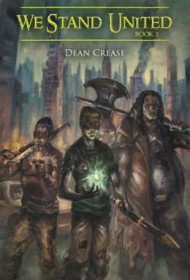 Fast-paced and fluent, this fantasy novel focuses on a war between a small army of super-powered men and women fighting against undead creatures, known as the Entity. Set in England, the story moves from battle to battle with brief respites between action scenes.

The main characters, Dean, John, Jasmine, Logan, Malcolm, and Ben (known only by first names), fight for The Alliance, humans determined to win the war and recover one of their missing soldiers. Dean struggles with his roles of savior, leader, and boyfriend to Jasmine, until “The Teacher” provides him with the missing information he needs to fulfill his destiny.

The “About the Author” page notes: “I like to write books that get right to the point, with plenty of action.” That’s definitely the case here, as this book is the second in a series and spends almost no time introducing characters, describing settings, providing context, or explaining behaviors. Warriors fight. Warriors die. Zombies regenerate.

For example, at a celebration one night, Malcolm dances with a woman he just met. Within minutes they become “two new lovebirds on the dance floor.” Readers learn no more about their relationship until when Malcolm is “thinking about popping the question.” If only love were that simple.

On the plus side, the author does not burden readers with excessive verbiage merely for the purpose of adding pages to the book. On the other hand, by not providing enough descriptive details about characters or offering more backstory, it might be difficult for readers to care about the outcome.

Just as this book apparently begins where the first story (The Green Warriors) ends, We Stand United stops abruptly with an obvious launching point for the third book. Though rich with potential, this novel feels incomplete as presented and may have limited appeal to those with video-game mentalities who crave instantaneous and relentless action without much context.