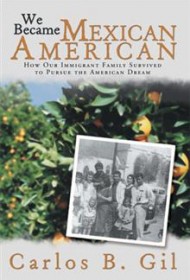 In the early 20th century, Carlos B. Gil’s ancestors lived in utter poverty, toiling as live-in peasants on a plantation in Jalisco, Mexico. Believing that America offered something more, Gil’s grandmother, uncles, mother and father made their way north to carve out a better life. Gil, emeritus professor of history of the University of Washington, writes a highly engaging story of their emigration by interlacing his elders’ testimonials with the rugged geography and historic details from Mexico to California, where they settled.

They spoke no English, but were willing to sacrifice, earning a little money by working on the railroad, in logging and orchards; making and selling tortillas; opening a small grocery story and even engaging in a bit of bootlegging during the Depression. They jumped trains for transportation and, when settled, squeezed a big family into a tiny living space in a San Fernando barrio. Despite the hardships, they felt no discrimination and were grateful that people of different ethnicities showed them “acts of humankind.”

Gil’s book is not an academic study, but neither is it a dull family chronicle. Gil writes with a cinematic eye for detail, delivering intricate word pictures of the people, places and activities. In describing tortilla-making in his grandma’s shop, he notes in part that the tortillera would bend down and grab the stone roller at the ends and “grind the masa (corn) two or three times, rub, rub, rub, pushing the reground masa toward the bottom edge . . .” Then “clap, clap, clap–the tortillera would whap the tortilla dough cake in midair . . . and then foist it expertly onto the hot griddle.”

Numerous black and white family photos enrich the book, as does the author’s addition of appendices, a glossary of terms, an index, end notes and even study questions. Vivid, highly informative and entertaining, Gil’s book shines and should be a staple on the bookshelves of history teachers and their students.