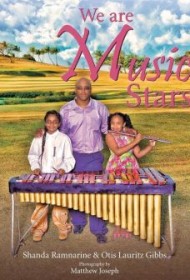 The world of music-making is mysterious to many young people, for whom a piece of sheet music might as well be a random scribbling. Now Shanda Ramnarine and Otis Lauritz Gibbs have published a picture book aimed at educating young readers on the subject. We Are Music Stars shows how two young people discover an interest in music and pursue that interest.

The story is told by twins, Zacharias (“Zack”) and Epiphany (“Epi”), whose musician father goes by the stage-name Khadijo. As the tale unfolds, the twins learn how their father became a musician, and readers follow Zack and Epi’s progress as they choose instruments of their own, meet their teachers, practice, and eventually perform for an audience.

While this will prove enlightening for children without musicians in the family, it’s unfortunate that the emphasis is on becoming “stars.” A story focused on the simpler, more personal enjoyment of music, without the adulation of a crowd, might have offered a truer image of being a musician. But to their credit, the authors temper the drive toward a big finale with frequent mentions of hard work, practice, and concentration. As stories involving music go, this one is grounded in realism.

The full-page photography used to illustrate the book is only half-successful. While the photos help tell the story visually, many seem overly staged, and the blending of stock photographs to depict onlookers in the background or an audience at the children’s first concert, is distracting.

In addition, the text is full of minor errors, for example: “Our Dad love music so much […]” and “[…] when he was ten years old something terrible happen to him.” There’s also an abrupt shift in voice halfway through the book, as Epi takes over as narrator, instead of Zack.

While it requires more polishing, We Are Music Stars offers a helpful introduction to the idea of learning to play music for those who can overlook its flaws.