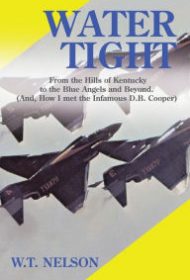 W.T. Nelson recounts his varied and interesting life in his memoir, Water Tight: From the Hills of Kentucky to the Blue Angels and Beyond.

One of 11 children, Nelson grew up in poverty in Beaver Dam, Ky. His older brother was allowed to name his newest sibling, and he chose “W.T.”  When the author went into the Navy, he learned that watertight—“w.t.”—was a common expression (watertight doors, watertight compartments, etc.), and he became known as “Water Tight” Nelson.

Nelson quit school at 15 and worked a variety of jobs before joining the Navy, where he spent 20 years. Remarkably, none of that time was on a ship. He served as a mechanic for the Blue Angels, the Navy’s precision flying team, and was also stationed in the Antarctic, Germany and Panama, where he helped develop secret monitoring devices used during the Vietnam War.

Post-Navy, Nelson moved to Oregon, raised a family, sold insurance, started a highly successful candy company and dabbled in local politics. He also explains why he believes that his best man, whose name he declines to reveal, was the famed hijacker/folk hero D.B. Cooper.

In all, his has been a full life, one concisely laid out here. Much like the man himself, the story remains on an even keel and doesn’t rely on over-the-top stories. Rather, the writing style is straightforward, dressed up by the occasional amusing tidbit or nugget of wisdom, such as: “Kids don’t always use good judgment, but the lack of good judgment is basically the definition of childhood. ”

More such colorful language and insight would have enhanced the narrative. Also, at times Nelson’s explanations about his work, such as certain technical aspects of a jet, or tempering tips when making candy, are overly detailed.

In general, Water Tight is readable, while lacking the artful presentation of more accomplished memoirs. It may particularly appeal to readers interested in the Blue Angels – and possibly D.B. Cooper.