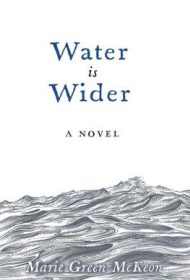 Marie Green McKeon’s novel, Water is Wider, revolves around two characters: a young girl with a troubled home life and a woman dealing with loss and the prospect of more.

As the story opens, 11-year-old Phoebe finds herself locked in the attic after an argument with her stepmother, Adele. Phoebe’s father has gone missing, but an unsigned postcard in Adele’s drawer convinces her he is in Connecticut. After she’s freed, Phoebe strikes out on foot from her New Jersey home in search of her father.

Meanwhile, in nearby Pennsylvania, Sidney, “a fifty-one-year-old spinster” has just lost her mother and must now deal with the decline of the Poppy Press, where she is employed as a proofreader. She is also coping with the possibility of her father, who left when she was a baby, threatening to steal her inheritance. Complicating matters is an erratic co-worker who is growing increasingly unpredictable and possibly violent.

In a random chain of events, Phoebe and Sidney’s paths cross. The two quickly bond and work to help each other.

This is an easy read, told in a comfortable, confident voice with characters readers will recognize, particularly Sidney and her office mates, the “lunch ladies” who meet to eat and gossip and occasionally include the annoying male know-it-all, J.T. While the characters’ troubles are serious, they are treated with a lighter touch that readers will appreciate. And although the novel isn’t a page turner, its pace suits the story.

On the down side, the narrative relies on plot turns that can feel questionable or contrived. And although Adele reaches out to authorities, she doesn’t seem to fully appreciate the gravity of an 11-year-old alone somewhere on the road. Likewise, the answer to Sidney’s problems seems at times a bit of a stretch.

These flaws distract but don’t sink the story. Those who like some drama, but nothing too weighty, particularly women readers, should find this a largely satisfying tale.