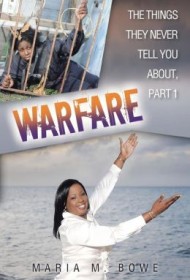 Spiritual warfare is a biblical concept, yet many Christians either weren’t taught about it or have limited understanding of the battles fought in the spiritual realm.

Author Maria M. Bowe considered herself a religious person, but it was not until she encountered birdlike manifestations of evil spirits and then suffered chronic illnesses doctors could not diagnose or treat that she became aware of the spiritual battle for her life and the need to move from being “religious” to having a relationship with God. Bowe, now an ordained pastor, addresses this concept in her book Warfare: The Things They Never Tell You About, Part 1.

Bowe says that we create “open doors” to spiritual attack “when we sin or do things that are displeasing to God knowingly or not knowingly that allows [sic] the enemy [Satan] to come into our lives and cause havoc.” She explains how to receive deliverance from spiritual attacks by repenting of sin, being obedient and seeking God through prayer and His word.

She also shows how God may use dreams and visions to guide those who seek Him. She writes, “Many times we spend more time seeking man-made solutions than taking enough time out to seek God.” Throughout the book, she stresses the importance of a personal relationship with Jesus instead of being what many people consider “religious.”

Warfare is an effective blend of Bowe’s story, scriptural teaching and personal application for the reader. The book is well organized and content-rich but could have used a proofreader to catch missing words and a few grammatical mistakes.

While the title indicates that Warfare is “Part 1,” the book stands alone. It provides biblical information for readers who want to know more about being victorious in spiritual attacks. Church librarians and those in ministry will also find this a worthy addition to their reference shelves.