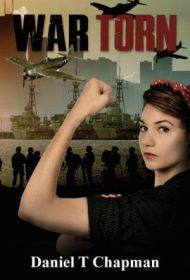 Set in the years leading up to and during WWII, the real battles in this biography/memoir are on the home front, where one family is torn apart and reconnected time and again until finally reaching an accommodation.

Told in the voice of Patricia McCord, the author’s mother, the book is constructed from her diaries and recollections, as well as those of her siblings. Most of the family discord is instigated by Patsy’s father, “a huge, silent man” who breaks his silence only to berate and sometimes beat his children, before throwing them out of the house, one by one. It’s only after Pearl Harbor, when the real war begins, that the family fires die down, except for occasional flare-ups.

Patsy tells of how the separation caused by war saves the children, allowing escape from the “worn-out, tension-laced fabric” of life with father. She joins her self-centered, older sister Jean and contributes to the war effort as a welder, first at a shipyard in Vancouver, Washington, and then setting out on her own. She becomes an accomplished welder and, after the war, a wife and mother.

Patsy’s inner toughness, coupled with perseverance, produces an indomitable personality, able to deal with racist remarks aimed at a fellow welder, hitching rides with drivers of questionable motive, even being accused of being a Nazi spy. Her story is a valuable illustration of an individual overcoming long odds and of how the war gave women new opportunities in a male-dominated culture.

Unfortunately, that exploration is somewhat marred by the author’s tendency to bring up and quickly drop topics that cry out for more resonance—such as suspicions of Patsy’s illegitimacy, her rejection of the teachings of the Catholic Church, and her mother’s death following a botched illegal abortion. At 626 pages, the book could also use a judicious trim.

Nonetheless, readers interested in personal struggle will find much to admire in this story of one family coping with a host of perilous entanglements.