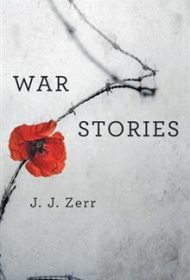 The 13 short stories in this compelling collection occur at different times in history and varied settings, but all share the perspective of a male, often one with a military background.

The opening story, “What Kind of Man Are You?” begins with a graphic rendering of life on an aircraft carrier during the Vietnam war. The narrator, flight deck officer Joe Bob Norgood, is a hard-nosed pilot determined to toughen up his recruits. He relates his experiences without drama or emotion as in one grim scene where he hears an odd sound from an S-3 jet engine: “It turned out an air wing kid had stood up right in front of an S-3 intake and was sucked in.”

In “The Short, Happy Love Life of Heiny Bauer” Heinrich “Heiny” endures the wrath of the strict Catholic school nuns under whom it seems he can do little right. Stories such as “Wimmin,” suggest an old-school attitude with little concern regarding political correctness. Zerr is perhaps at his best with “The Noble Guerilla,” set in 1863, in which a young man leaves the family farm and inexplicably signs on with a band of murderous guerilla fighters. Unfolding in a realistic manner, the story offers no easy outs for a generally sympathetic character.

Zerr is a fine writer with an original voice and an ear for language, such as in this sentence where he describes the passage of time: “Tock didn’t seem at all anxious to chase after tick.” The stories’ points of view vary from first to third person, while the tone shifts from light-hearted to straightforward, always with authentic detail. Throughout, the voice is strong, and the collection is well-edited, with only one or two small errors, such as the mix up of names when Aunt Zelda becomes Aunt Zoe.

Likely to appeal most to a male readership, War Stories will please a wide audience and particularly those born early in the boomer era.