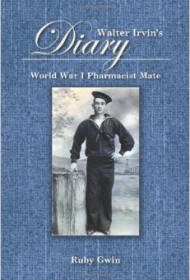 This century-old diary kept by a sailor provides a small window into life in the U.S. Navy during World War I.

Born in Texas in 1894, Walter Irvin left home to find his fortune in California, and in January of 1913 joined the Navy, eventually becoming a pharmacist mate. A year after enlisting, he began his diary, which he kept on and off for more than five years. It follows him during two stints in the Navy, the second during the war, where he served on the USS Saranac, which laid mines in the North Sea.

Author Ruby Gwin, who thanks Irvin’s descendants for providing the diary and photos for the book, offers a preface looking at the geo-political events that led to WWI. Except for a few short passages, she leaves the narrative to him.

And therein lies a problem. On countless occasions, Irvin refers to a person or event without presenting any context. For example: “Alofa came back today, and Knight left on today’s steamer.” We aren’t told who Alofa or Knight were, where Alofa was or where Knight was going. Such holes are to be expected in a diary, but Irvin’s journal has more gaps than informative details.

There are entries that WWI buffs might find interesting, though they are hardly compelling (“Wish to God it was over; I’m getting lonesome and tired of this damn war game,” and, while at sea laying mines, “At 6:25, the circulatory pump broke down, and here we are at 9:00 p.m., setting here as still as a mouse in the path of the Huns subs …”).

The book features more than 100 photos and sketches, and Gwin adds a late chapter about Irvin’s post-diary life. Unfortunately, virtually nothing is known about what he did between the world wars.

We are left with an incomplete picture of the man and only fleeting glimpses of his military service, making for an often-frustrating read.