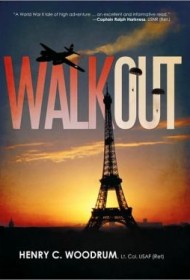 As Woodrum’s memoir opens, it’s May 28, 1944, and Woodrum, at the time a U.S. Army Air Corps pilot, is awakened before dawn – hung over and two hours from a three-day pass – to replace a sick pilot on a flight from London to Paris to bomb a railway bridge. Within sight of the Eiffel Tower, Woodrum’s B-26 is hit by enemy fire, forcing him to bail out over Nazi-occupied France. Instead of three days of R&R, Woodrum spends three months in hiding.

“I remembered hearing that if you could stay free the first twenty-four hours your chances of successfully evading were about fifty-fifty,” Woodrum wrote. “Those seemed like pretty good odds to me.” His 35th mission, 10 days before the D-Day landings at Normandy, might have been his last if not for the French Resistance, whose members risked their lives to hide and transport him.

While the narrative of his ordeal delivers occasional moments of suspense when Woodrum and his hosts narrowly avoid detection, the pacing more often reflects the monotony and boredom of being in hiding, lending a meandering quality that detracts from an otherwise well-written book.

But Woodrum’s prose is remarkably detailed, especially given that more than 40 years elapsed between his evasion and his book. He writes, for example, that a German officer that pulls alongside the car in which Woodrum is riding, is sitting ramrod straight with a monocle screwed tightly into his right eye,” and that a “pink, jagged scar curved from his temple and along his jaw to the corner of his mouth.”

Francophiles and military buffs will devour the affable pilot’s colorful account of not only the people who hid him but the meals they served, the wines they poured and the strategies they employed to keep him under wraps. Many paid with their lives. Walkout is a heartfelt tribute to them.