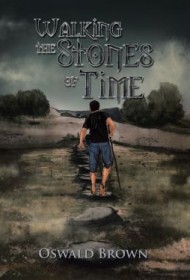 Oswald Brown reveals his depth of knowledge of ancient history in Walking the Stones of Time, a fantasy that successfully veers from the standard formula of wizards, monsters and epic quests. While the author includes exotic landscapes and epic characters, his heroes are nomads and tribesmen, warriors who inhabit a prehistoric landscape marked by constant conflict and peril.

In the book’s general structure, Brown borrows core elements from the best in the fantasy genre; the protagonists’ drawn-out fight against a host of heartless enemies recalls George R.R. Martin’s most popular works. As they flee assassins, slave traders and a host of human enemies, the characters travel through landscapes with evocative names like the Valley of the Flies, the Water Gate and the Lost World.

Despite the fantastic, imagined universe, however, the action here is driven more by human drama than magic. That’s due largely to the central conflict underlying this love story between Pender and Zalenda, two star-crossed lovers whose struggles are much larger than their own forbidden love.  Pender, the leader of a tribe of female refugees from the slave trade, and Zalenda, a rescued slave, become enmeshed in a harrowing struggle to win the most basic prize of freedom.

In his introduction, Brown insists his story of flight and survival has parallels to contemporary human trafficking, which still flourishes in parts of the world. It’s not easy to immediately see those connections, but the comparison isn’t impossible. That’s attributable to Brown’s evocative narrative style, one that makes up for the slower stretches of the 400-page tome. Thanks to straightforward prose, vivid descriptions of everyday life in a time before recorded human history and fantastical elements that all bring the basic themes of love, freedom and struggle alive, Brown creates a world that doesn’t seem so fantastical. Any student of ancient civilizations will find much to enjoy and consider in this ambitious and heartfelt work.