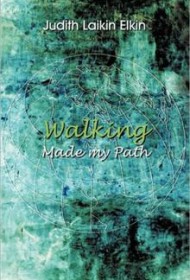 “Growing up in 1930s Detroit, no one I knew had grandparents,” Judith Laikin Elkin begins in her memoir, referring to the price American Jews paid for their overseas roots. Her parents were among the fortunate who fled European ghettos and raised families in America, and Elkin’s own path was equally unconventional; hence, the title: wherever she walked, that was her path.

Elkin was immersed in Zionism in her youth. She earned a master’s degree in international affairs, spent five years overseas with the U.S. Foreign Service and received a doctorate at age 44, which led to her pioneering a field of study and eventually founding the Latin American Jewish Studies Association.

Documenting the history of Jews in Latin America became her passion, and she headed to South America in her late 40s, covering the continent and later Cuba, immersing herself in the culture and collecting stories. The task was overwhelming at times. “What can I accomplish here in Chile, where politics take place on the other side of Alice’s mirror, where Jewish concerns are dwarfed by the country’s political upheaval, where archives have disappeared…?” Argentina’s revolution was winding down but ever present and disturbing: “In Buenos Aires, the torturers mingle with the tortured [on city streets], and they do not always recognize one another.”

It’s easy to forget this is a memoir, because as a historian, Elkin is absorbed with observations and musings about her surroundings, rather than the details of family life. To the end, we know little about her life with her husband and two daughters. She acknowledges the shortcomings of her attempt to capture it all: “A quarter past eighty. Time to bring my memoir to a close, without perhaps having connected the various persons I was to the one I am now. I have not walked back all the paths that led me to the present time. How could I have?”

She chose well. Her engaging writing contrasts, however, with many lapses in copyediting. These should be fixed before the next printing, to best preserve the author’s professionalism and her wonderful story.