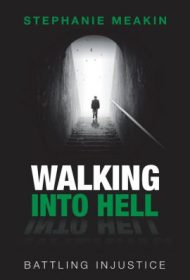 Author Stephanie Meakin describes losing her husband to illness, then confronting their shared past, in her often-puzzling memoir Walking Into Hell: Battling Injustice.

In writing that seems to follow a looping timeline, but with only loose transitions between timeframes, Meakin describes losing her much older husband unexpectedly to cancer. She explains in a flashback that a Christian pen pal arrangement led him to visit her in the Philippines. Soon they marry and she is living with him in England, in a loveless marriage. She becomes a pastor, a life transition that is not clearly explained, and then, after her husband’s death, a series of legal complications arise.

This is where things derail. At first, it seems as though Meakin’s husband dies and she’s then questioned about financial mismanagement of church funds, as well as faking a disability for money. Later, though, he appears to be alive during some of her legal difficulties. She blames him for many of these problems and implies that he was abusive and a criminal/Godfather-type figure, but does not offer enough information for readers to follow her thinking. She is ultimately found guilty of fraud, then works to rebuild her life and reputation, and heal her grief.

Meakin clearly has a complex story to tell, but Walking Into Hell has the feel of a free write or data dump, with facts coming out in no particular order. As such, readers are left to puzzle over how all the pieces fit together.

Rewritten to flow chronologically (or with clearer indicators for flashbacks), and with far more specific details and less that we must simply accept on faith, it may well be an amazing story. Right now, it’s too hard to tell.