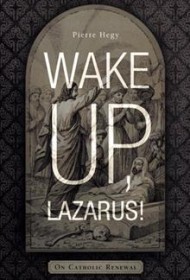 Wake Up, Lazarus! is a thoughtful, passionate book by a veteran author that has been praised by many critics, including a reviewer for National Catholic Reporter, who called it “the best book on church renewal I’ve read.”

Pierre Hegy, who has published previous books on religion and culture (in both English and French), is a committed Catholic, and like many of his brethren he thinks the Church’s current problems go much deeper than the clerical sex scandal. “Catholic decline in the West [today] may be of the magnitude of decline that happened at the end of the Middle Ages and the Reformation,” he argues in his introduction. His proposal for change calls for personal and institutional renewal “to help the faithful move up from passive to active participation in the liturgy.”

Wake Up, Lazarus! offers three sections. In the data-heavy opening section, Hegy leads readers through studies and statistics that illustrate both a general decline in religious affiliation throughout the West and the specific declines faced by the Catholic Church, which has been hemorrhaging members, priests and religious (nuns and sisters).

In the final section, Hegy evaluates various renewal programs to determine which have the best chance of accomplishing his targets, including ending the exodus of young Catholics, promoting spiritual growth and devotion, strengthening community, and challenging believers to learn how to both engage and renounce various aspects of the broader culture.

In the fascinating middle section, Hegy looks closely at two churches that exemplify his goals. St. Mary Church, a Catholic parish in East Islip, New York, was the site of “Operation Lazarus,” which revitalized the congregation in the 1970s. More surprising is Hegy’s examination of an evangelical Protestant church that exhibits many signs of spiritual vitality that are lacking in Catholic churches.

For those who want to do more than merely fret about the future of the Catholic Church, Wake Up, Lazarus! is a heartfelt and well-argued call to action.