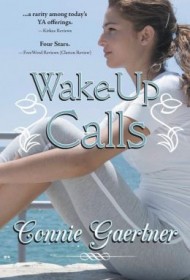 In her new young adult novel, author Connie Gaertner vividly captures the psychological rhythms of adolescence in a story of a teen’s eventful summer, tackling her character’s first job as well as matters of the heart.

At 17, Krista is excited and nervous as she begins working at Watson’s Flower Shop. Her co-workers include owner Sophia Watson; Cheyenne, a young flower arranger with a quirky fashion sense; and Mario, Sophia’s college-bound son, who takes a shine to Krista.

As the story opens, though, Krista has eyes only for Jeff, a handsome, cavalier boy her own age. Though she finds Jeff exciting, Krista grows increasingly unnerved by his violent temper, evasiveness and controlling behavior. Meanwhile, her developing feelings for Mario complicate her job and her relationships. Surprising news from her parents and a revelation that Mario, too, has not been entirely honest lead Krista to develop an increasing sense of direction and self-reliance.

Gaertner deftly displays how the teenage mind mulls every happy or awkward moment in excruciating detail. After talking to Cheyenne about Jeff, Krista reflects, “Why is it that when I’m interested in or have a crush on someone, I rattle on? … I’ve probably gotten off to a rocky start with Cheyenne.” She notes the way Mario’s sleeve brushes against her arms and how Jeff doesn’t help her lay out her beach towel.

The author skillfully renders Krista’s combination of insecurity and pride as she enters the working world, keeping the story from becoming just another YA romance.

Wake-Up Calls tackles heavy topics but treats them sensitively: the content never becomes too much for a young teenager or older preteen. Though Jeff’s potential violence is an issue, he never physically harms Krista, and their physical relationship is limited to kissing. The novel should appeal to young readers curious about dating and growing up but interested in a realistic story with complex characters.